It was a Historic Beatdown! 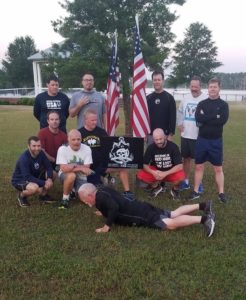 After teasing “It will be Historic” on the Wednesday Ruck and on Twitter, Q Cornhole directed the @F3WashingtonNC Pax down Main Street for a History lesson and a F3 Beatdown. My Abs hurt!

11 strong men circled up at 5:15 in the Shipyard. Sprinklers came on, goosed the Q and pax moderated to half moon circle. Q called for the following:

Q called for a Mosey to the corner of Harvey and East Main. Once there, Pax stopped at our first Historical marker, Josephus Daniels (Secretary of Navy). Q called for Pax to read this and all markers on the tour in unison. Then the following set was called: 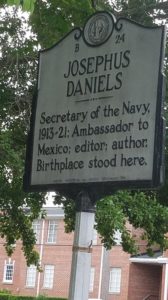 Pax Moseyed to the next Marker, Dr. Susan Dimock. Q called the next exercise, 20 Dr. Ws: 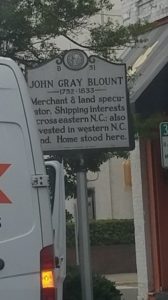 The Boat position would be while on six with legs pulled up to chest and arms beside body. Canoe is when legs and back are straightened while keeping both off the ground. Q called out Boat or Canoe.

Pax Mosed to the Fourth Maker, The DeMille Family. Q called for a circle up where he explained two exercises in one, “Jack Moses”. See Exodus 17:10-12 10So Joshua fought the Amalekites as Moses had ordered, and Moses, Aaron and Hur went to the top of the hill. 11As long as Moses held up his hands, the Israelites were winning, but whenever he lowered his hands, the Amalekites were winning. 12When Moses’ hands grew tired, they took a stone and put it under him and he sat on it. Aaron and Hur held his hands up—one on one side, one on the other—so that his hands remained steady till sunset. 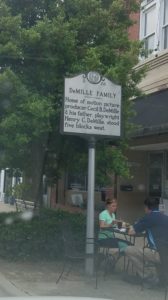 After circle up, Q called for 40-plank jacks and then stood to lock hands for 40 air presses.

Pax Moseyed to their fifth marker, Daniel G. Fowle. Q Called for 10 No Surrenders. Pax complained about doing the exercise on sidewalk (Skinned Knees). Duct Tape reminded them, “We need no skin”. 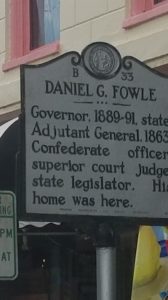 We Began the no-surrender in the standing position with our hands locked behind your head and elbows pointing outward.4 count: 1.Go down on left knee, then 2. down on the right knee so now you’re on both knees. 3.Then stand back up on left leg then 4. up with the right leg.

Pax Moseyed to their Sixth marker, Siege of Washington. Q called for a “Union Run”. 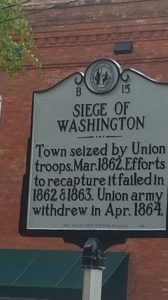 Pair-up Pax 1 runs backwards while Pax 2 does 3 squats, then Pax 2 attempts to run down the Pax 1. When catches, switch positions with Pax 1 doing 3 squats and Pax 2 runs backwards.

Pax Moseyed 10 yards to the seventh marker, African Americans Defend Washington. Q called for a snake Run to the next marker. 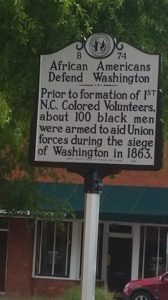 Take on Indian Run, but slower pace. Last Pax must weave his way through the Pax to the front of the line. 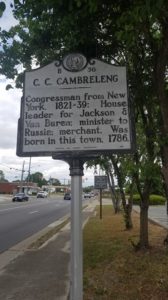 I will note here, that Largemouth called out Q for doing Lollipop Kids (back was on ground) instead Merican Hammers (back off the ground). There is quite an easy explanation: 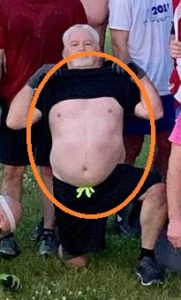 With 15 minutes left in the workout and before we headed back toward the flags we found ourselves on Highway 17. Q took the opportunity to promote @F3WashingtonNC. He had everyone lineup, arms length apart, on the sidewalk facing the road. When Q called out “Yankee Go Home!”, everyone was instructed to do 3 “Pickle Pointers”. After doing 3 or 4 sets as practice, Q waited for traffic to come by and he would call out again “Yankee Go Home!” We put on quite a show for the passing traffic and showed great knowledge of the history we had learned.

Q called for run back to the lighthouse, and then to the Kiosk showing the History of Washington. Q instructed the Pax to have one member read one sentence while switching members for the next sentences, until all the written information was read. Non-reading pax did ongoing and continuing Burpees until the History lesson was over. 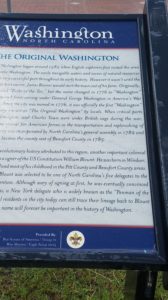 Q called for a run back to the flag, stopping at each street lamp to do a Hallelujah. Largemouth added 1 Pickle Pointer to the each stop and Pax followed his lead.

Quite a workout, with special attention to the abs. Thank you for letting me Q. It was fun! 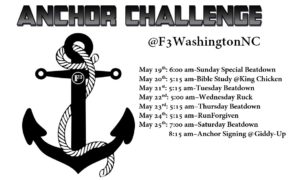