The mission of F3 is to plant, grow and serve small workout groups for the invigoration of male community leadership.

F3 — our three Fs stand for Fitness, Fellowship and Faith — traces its roots to a free, participant-led boot camp workout held on Saturday mornings at a Charlotte, N.C., park since 2006. The leaders of F3 launched their first Saturday workout on 1/1/11, on the campus of A.G. Middle School in Charlotte. 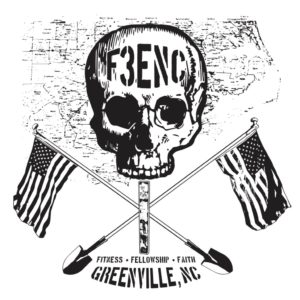 ENC Crossbones was started by The Closed Hand in the Fall of 2013 with weekly workouts on Saturdays. Early 2015, The Closed Hand heard of Papa Smurf who was organizing workouts on Monday, Wednesday, and Fridays. The two got together, then contacted F3 Nation and were launched by F3 Raleigh on Saturday, February 21, 2015. On Saturday, July 30, 2016 at our Second Annual Sasquatch (home grown CSAUP), OBT declared us a Region.

Our Credo – Leave no man behind, but leave no man where you find him!

Watch the Videos or Listen to the links below

How F3 is Funded?

F3 Nation incurs administrative, legal and website expenses that are covered through partnerships with businesses who support F3’s mission and the sale of gear bearing the F3 logo. Revenues generated in excess of expenses are turned over to the F3 Foundation on an annual basis.

You can find out more about which cookies we are using or switch them off in settings.

This website uses cookies so that we can provide you with the best user experience possible. Cookie information is stored in your browser and performs functions such as recognizing you when you return to our website and helping our team to understand which sections of the website you find most interesting and useful.

Strictly Necessary Cookie should be enabled at all times so that we can save your preferences for cookie settings.

This website uses Google Analytics to collect anonymous information such as the number of visitors to the site, and the most popular pages.

Please enable Strictly Necessary Cookies first so that we can save your preferences!